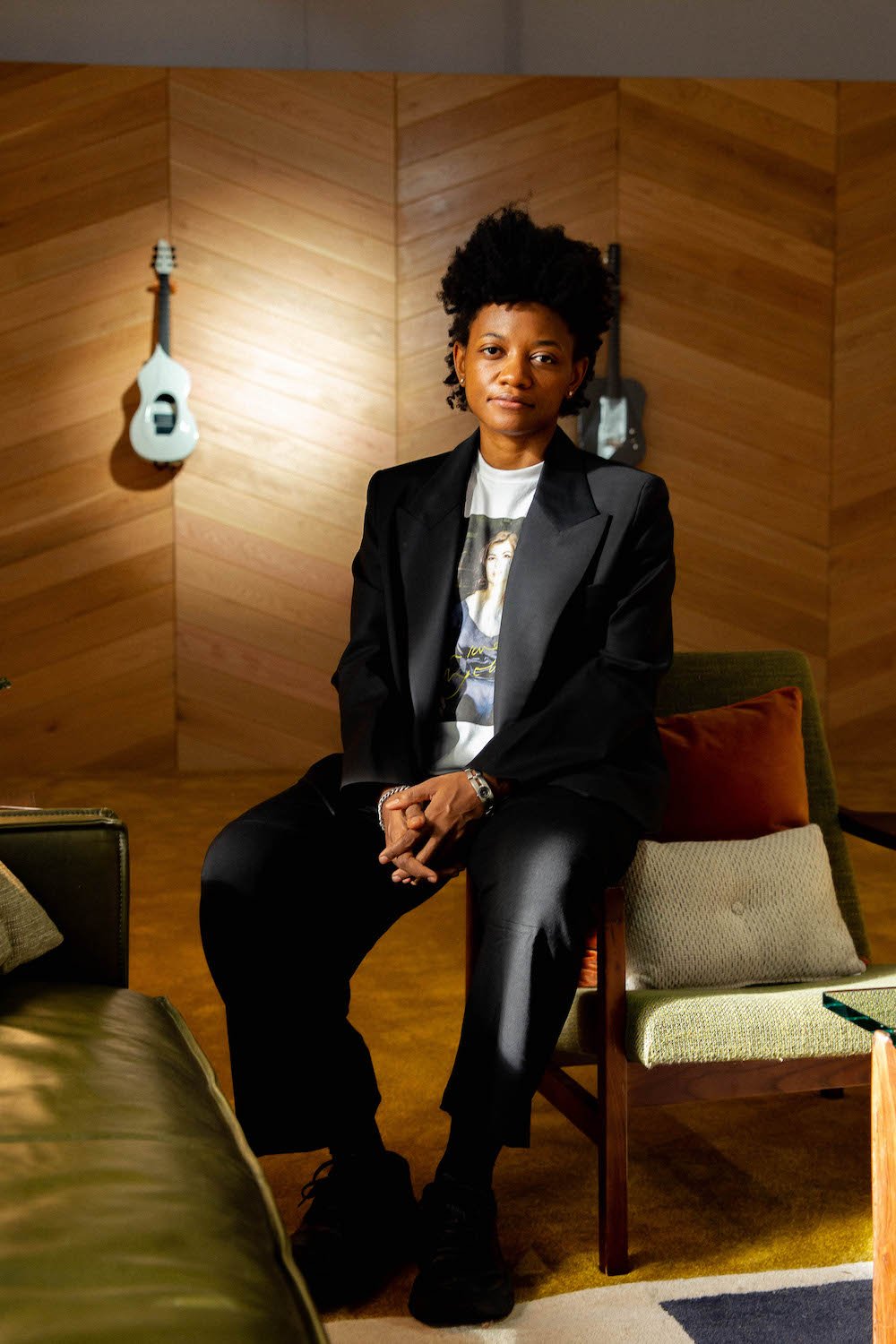 Five custom-made electric guitars are mounted on the makeshift wall at at Frieze London. These intricate objects form part of a larger artwork called ’63/22′ by LA-based multidisciplinary artist Nikita Gale. Each guitar is named after significant Black female guitarists of history: Memphis Minnie, Sister Rosetta Tharpe, Barbara Lynn, Big Mama Thornton and Joan Armatrading. Every few minutes a spotlights directs our gaze from one guitar to the next. Later in the day, three musicians will activate the guitars through live ten-to-fifteen-minute performances.

This is what happens when seemingly disparate industries overlap – when ideas collide. ’63/22′ is an artwork loaded with meaning. It takes on the current discourse on the politics of sight and sound, what we are guided to see, and what we are told to hear, and of invisible voices. Through the medium of design and sound, Gale is asking us to review our biases, question what has come before, and make change happen.

’63/22′ is directed by Gale in collaboration with a team of car designers and the luthier Ian Malone for BMW Open Work by Frieze. The initiative itself aims to bring together art, design and technology, and to show this in a setting outside of the auto world.

The 63 in the title refers to the year 1963, when Gibson Guitar commissioned a car designer by the name of Ray Dietrich, who had pioneered the concept of the custom-built car designer in the age of classic cars. The idea was to bring in a creative voice from outside the traditional music world who would investigate the possibilities of the electric guitar in shape and feel.

Conventions were broken with Dietrich’s asymmetrically shaped Firebird sporting a taller horn positioned on the right rather than the customary left. The wooden neck had nine strips of alternating mahogany and maple, layered for strength and stability, spanning the full length of the instrument. It featured some wonderful quirky details too, with the wings thought to resemble the car’s tail fins. And it sounded unlike any other guitar of its time.

We meet Nikita Gale at Frieze London to untangle the complex artwork, ’63/22′.

Why an interest in the politics of sound?

My mum was a music teacher, and music was always happening in our house. Alongside teaching me the piano, she would speak about historically significant musicians. Growing up on an air force base in Alaska, she was often a visiting music teacher to our school, giving lessons on Black music history and so on. For me, it wasn’t only about enjoying the music but thinking about the histories that preceded it.

Your project at Frieze continues the investigation into the politics of sound but through the lens of the car. How did this connection happen?

At grad school, I began thinking about cars not just as technologies but as objects that we project cultural and political information into, in that the modes and the means of production of these technologies are not neutral. Decisions are being made that are informed by political positions: are the cars powered by fossil fuel versus electric, or the designs and shapes they take? What cars look like is largely determined by the understanding and biases of the people designing them.

Most of whom would be of a certain gender. How did you then circle this back to music?

While investigating cars, I began encountering interesting information about music, particularly American blues and rock. Early blues and rock songs were largely about cars, such as Ike Turner’s 1951 ‘Rocket 88’ – considered the first rock and roll record. Cars are metaphors for personal freedom, sexuality, and gender expression. The overlaps kept happening during my research, which is when I came upon Ray Dietrich and his work with Gibson in 1963. It is the first time these two industries overlapped on such a large, mass-produced scale.

It must have seemed quite a surprise then to be approached by BMW for the Frieze project. Speaking with the curator Attilia Fattori Franchini earlier, she was unaware you were already thinking along these streams of ideas.

Crazy, right? I had this idea in my back pocket for seven years, so when BMW reached out to collaborate at Frieze, I already knew what I wanted to do. It was an incredible coincidence, and I knew we had to do this. Added to this, I’m a real car fan.

And how do you feel about the project that is displayed before us?

It never ceases to amaze seeing an object born out of a concept that exists in space. This project has truly taken this to a new level. These guitars are not just aesthetic art objects but functional technology; they are all playable guitars that Ian Malone helped make possible.

The guitar you’ve designed have clearly questioned the conventional shape of the instrument, its masculinity.

Yes, absolutely. During the design process, I discussed the profile of the types of users of these technologies with the BMW designers. We looked at who would be playing the guitars and how we should be designing with other bodies in mind other than the typical type who were determining the shape of things in the 60s, which would have been primarily white men. The musician St. Vincent recently designed a signature guitar that has a much narrower body to accommodate people with breasts. I asked our designers to consider ergonomics with all body shapes in mind.

Can you explain the performative side when these aesthetic objects neatly lining the wall are played?

We’ve invited three diverse musicians to perform at 3 pm each day, giving them carte blanche to do what they want and choose the guitar they like. It’s been fascinating to see which ones they go for. Luckily no two have gone for the same guitar.

’63/22′ interrogates the politics of sight and sound, what we are directed to see and allowed to hear, and how this manifests itself in invisible voices. What were you hoping to achieve with the project?

I strongly believe in the importance of modelling possibilities. So, when I think about this moment in 1963, where these industries overlap, I look at this as a demonstration of what is possible when conversations are allowed to overlap in a very direct way. I’m looking at the moment when ideas collide.

Given that general guitar design hasn’t changed so much in the last 60 years, by recreating and almost staging the scene in this context, we can shine a light on the possibilities of change.

The shapes and forms of technologies were largely determined by the biases of people designing them. As political and cultural landscapes change, those biases also shift. Where are we now? Why are we sticking to what came before? We can still change things. Nothing is set in stone. In the essay Technology and Ethos, Amiri Baraka, writing as LeRoi Jones at the time, has a great line: Nothing has to look or sound the way that it does.